American Motoring just started a YouTube channel.  So please feel free to follow us.  We'd appreciate it.  To start off the channel we posted a quick video or our 2014 GT500 Shelby Cobra starting up and backing out of a garage.  It's short but we hope you enjoy the sound of 662 hp.  American Motoring YouTube

Hell's Bells: Dodge Has Been Trying to Conjure It's Demon for Awhile

With all this talk lately about the Dodge Demon / Challenger thing does anyone remember this concept from not so long ago?  Seems Dodge really wants something to get named Demon at some point.  This 2007 concept is miles away from what they are currently boasting. 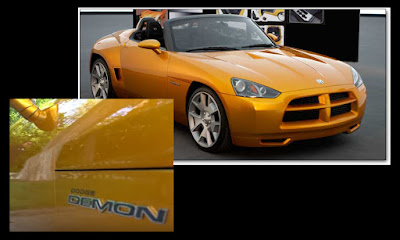 The Dodge Demon was a concept made by DaimlerChrysler, designed to slot in under the Viper as a more affordable sports car from Dodge. The Demon was first shown at the 2007 Geneva Auto Show, and is was considered for production. It was conceived to compete with cars like the Pontiac Solstice, Saturn Sky, and Mazda Miata. Unlike many other concept cars, the materials and construction design of the Demon were such that production would be feasible. 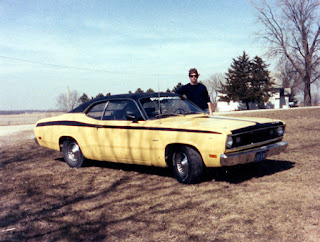 Many of you may not know I have a project car.  Well it’s a car that needs work which I don’t have time or space to start.  It’s my first car that I bought when I was 18.  It got me through many street races in high school, I lived in it for two weeks until a girl took pity on me, and it carried me into adulthood.  It’s my 1970 Plymouth Duster 340 4-barrel with a 3-speed on the floor.  Bright yellow with black racing stripes, everyone of course called it the bumble bee.
In about 1991 I parked the car in a nice cement floored building on my mother’s farm with the intention to restore it.  It had started burning some oil and needed an engine overhaul at the very least.  I got as far as pulling the engine and disassembling it.  During the process I found the issue which was a broken piston ring.  I had the engine bored and cleaned up but then I stopped. 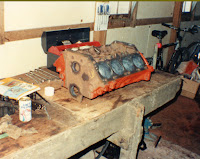 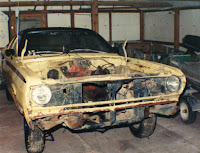 One day I thought, “This car is going to cost a lot to restore.  Maybe instead of spending money on that I really should get out of my stupid factory job and go to college.”  So that’s what I did.  I started saving up for college, quit the factory and graduated with honors.  After college I moved to Los Angeles,  8 years later to Wisconsin, then 8 years after that I moved to Toronto Canada.  All the while my Duster waited. 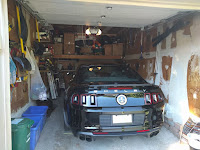 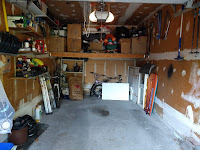 Most places in the Toronto area seem to have one stall garages and Canadians don’t even seem to use their garages for cars very much.  My landlord here curiously asked me once why I put my car in the garage like it was a bizarre thing.  Certainly there are houses with two stall garages in Toronto but not at all as common as they are in the States.  So having space for a project car is not something I have the luxury of. But I really should get some momentum happening with the Duster.
For a time I felt I had a clever solution.  This was to rent a space like a garage or a barn or an old gas station as a workspace for my project.  Just some space nobody was using. It would give me a space to work and also get me away from the house for a little escape, perfect right?  However I quickly found that places renting these kind of spaces assume you’re going to start a business of some sort and charge rent accordingly.  In most cases the cost was higher than my living space.  So my next brilliant idea was that I would find a bunch of likeminded people and together we would rent one of these spaces for our projects.  But finding like minded people really became looking for like minded strangers, and strangers that would have access to my tools and parts.  Suddenly that didn’t sound like such a good idea.  So my beloved Duster remains in storage patiently waiting for me to get my act together.
During its wait I’ve dreamed of going many different directions with the build.  Of course there is the stock restore option but frankly a Duster isn’t the premier muscle car and mine wasn’t an original 340 car, it was a 318 from the factory so there really wasn’t much value in that.  For a long time I wanted to make it a vintage autocross car to join in those retro Trans Am races which is still in my head.  It would certainly be a challenging build to get a Duster to handle corners.  I’ve always loved the ’67 through ’69 Barracuda and my 340 would live happily in one of those.  I’ve also even thought a couple times of just selling it but I don’t know, the idea kind of hurts my soul.  One thing has always bugged me about the car though and it’s the lines.  I always felt to me it should be a fastback.  So I started playing with Photoshop and I think it works!  I’m not certain how I would handle the rear window but I think it could be good.  What do you think?

Anyway none of this is going to happen if I never find a workspace for it.  Do any of you have similar dilemmas?  Did you find a solution to space issues?  They say a real car guy can work in the driveway in any weather but “I’m getting’ too old for that”
Posted by Chad at 10:14 AM No comments: 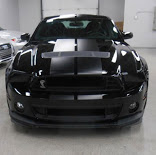